Just mention the name Athens, and one conjures up images of gods and goddesses, warriors and poets. With its ever-present sea and sun, amazing sights, and welcoming populace, the “Paris of the Mediterranean” is a dream destination for pleasure-seekers and business travelers alike. 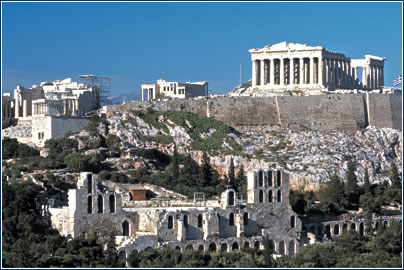 Where on the web?
For further information, we suggest the following websites dedicated to Athens:
http://www.worldexecutive.com/cityguides/athens/ – as the URL suggests, this site specializes in helping executive travelers find the best deals on hotels, while offering a perfunctory guide to the city.
http://www.abasefortravelinfo.com/athenscitytourism.html – a bland but useful portal page, where users can find many other related sites with more in-depth info.
http://athens.cybercityguides.com/mainindex.html – an easy-to-use, but somewhat sterile guide to the city, via links in various categories.
http://www.gogreece.com/travel/select.asp?CityID=46 – part of the slightly more hip “go Greece” travel guide series.
http://www.athensguide.com/ – the “Athens Survival Guide” offers the site moderator’s insider tips to places to stay, things to see, and where to eat and drink .

The public sector is a dominant force in Greek economy. Tourism is the largest industry, with turnover estimated at USD 10 billion, accounting for about 8.5% of GDP.

Greece is a key link to the emerging markets in the Balkans and the eastern Mediterranean. As the only EU state in this part of Europe, the country is regarded as a zone of relative economic and political stability within a volatile region.

Greece has the largest merchant marine fleet in the world, with an 18% share of international commercial tonnage. The Athens metropolitan area accounts for most of the country’s industry: tourism, textiles, machine tools and shipping are among the key sectors.

The award of the 2004 Olympic Games is prompting a surge of investment as well as major construction projects to accommodate the influx of visitors.

The working day in Athens is fairly flexible. In general, offices are open 8:30-16:30, although shops and banks may have different hours (smaller organizations still close for a siesta in the afternoon during summer).