The four-star Anděl’s Hotel Prague opened in June. It is one of the two newest portions (along with Village Cinemas) of Anděl City, a 100,000 m2 – and growing – development by Austria-based UBM. The bold, unequivocally modern design of this five-storey, 239-room hotel immediately sets it apart from anything currently offered in Prague. It is operated by Vienna International Hotels and Resorts, who run a total of six hotels in Prague, including the well-known Savoy and Le Palais, the latter also newly-opened by UBM. 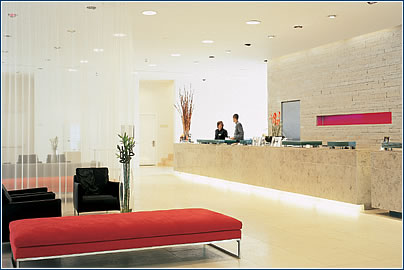 The lobby, accessible through a wall of glass, is fresh and bright. The reception desk, a monolith of hewn stone, is set deliberately low to break down the traditional formal and physical barriers between guest and staff. Inset writing blocks are of stacked glass. 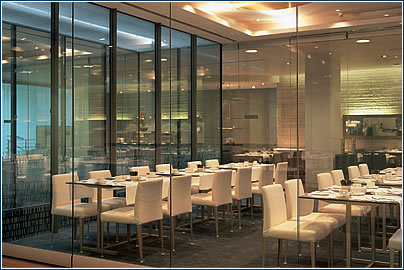 Conference facilities, located on the first floor, are flanked by pre-conference area and a restaurant. Glass-walled private dining rooms offer further meeting possibilities. The conference area is divisible into nine rooms, while the adjacent cinema offers further opportunities for conferencing. 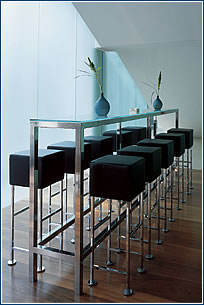 Lobby bar – quiet corner under the stairway to the first floor. 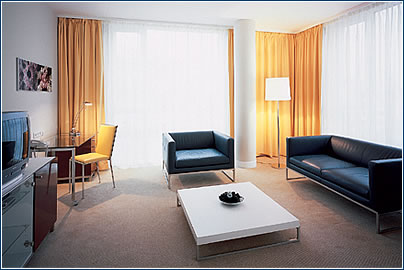 The rooms, like the lobby, are flooded by light thanks to floor-to-ceiling windows. The furniture is simple in polished laquer and glass – eg, a cube holds mini-bar and multi-media system including DVD. Wall-high sheets of glass instead of the usual ceramic tile in the washroom are both a functional advantage and an aesthetic gesture.