Written by: Monika Mudranincová
Photo by: V&V
Not surprisingly, the opinions of Euro-optimist Monika Pajerová and Euro-skeptic Petr Mach about Czech accession to the EU are a study in contrasts. Their dual interview with The Prague Tribune simmered with arguments and invective. 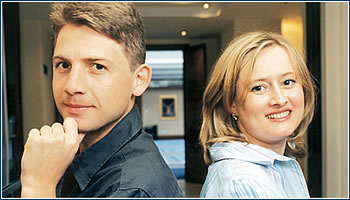 Mrs. Pajerová, what are your three basic reasons why the Czech Republic should join the EU?
Monika Pajerová, coordinator of the Yes For Europe civic association (MP): First, it will be our opportunity to create our own history and influence Europe’s history. Furthermore, I think that the standard of living will rise, and I hope that we can do away with Czech provincialism, whereby we see every foreign country as a rival. It is well known that when countries work together they do better.

And what three reasons can you give for not joining the EU, Mr. Mach?
Petr Mach, executive director of the Center for Economics and Politics (PM): I see the main reason as our loss of national sovereignty. By joining the EU the Czech Republic will undertake to accept legislation that originates on the European, not the Czech, level. We could be out-voted in EU institutions. The second reason is what they call the democratic deficit in the European Union. The Council of Ministers of the EU is a body that issues binding guidelines and decrees. It includes people who have not been elected to their positions by citizens, but they still make decisions on laws within the EU. Thirdly, I believe that EU accession would threaten our economic growth over the long term.

Mr. Mach stated that EU accession will cost the Czech Republic its sovereignty. How would you respond to this worry?
MP: All of the investors that are now here clearly don’t share Mr. Mach’s views. Most economists say that the business environment in the EU is healthy, transparent, and incorruptible over the long term.
PM: (interrupts): But that wasn’t the question, it was about sovereignty.
MP: The two are interconnected. The best economists in this country, such as Messrs. Kysilka, Tůma, Ziegler, and Zahradník, agree that we need EU membership, because the union provides a stable environment for economic growth. If the union were so bad there would have to be a state that wanted to withdraw from it! I disagree that the EU will threaten our sovereignty, because sovereignty in the modern sense of the word is about cooperation, dialog.
PM: But if you look at the standard definition from political science, you cannot doubt that we will lose our sovereignty through EU accession.
MP: That definition is from the 19th century! It is obsolete, but of course when we decide matters with those whom we share a common space, we will give up some of our influence, and we will also gain some.
PM: And that’s just it. We will give up our sovereignty in certain areas to EU institutions, and we will be able to influence such absurd matters as, for example, fishing regulation in Portugal. I don’t see any benefit in that.

Euro-optimists expect our EU accession to result in a competitive environment and the economic growth associated therewith. However, Euro-skeptics claim the exact opposite. European standards allegedly make a competitive environment impossible. Which do you uphold?
PM: Just two examples. The EU will force us to charge higher VAT on certain goods and services than in Austria and Germany, for example. Where there are two pubs in the border area, the Czech one will have to charge higher VAT, not to mention that the Czech entrepreneur will have to buy hands-free faucets for the bathrooms, which means additional expenditures. Or egg producers – they will have to invest about CZK 5 billion in chicken cages that meet European standards. There is no case where a Czech businessman will save money thanks to European guidelines.
MP: On the contrary. I’m convinced that for this country EU membership will mean continuing in the trend leading to prosperity. Let’s look at Ireland, Spain, and Greece, what their situation was prior to their joining the union, and how they’re doing now. But anti-Europeans always mention the example of the chicken cages.
PM: While you mention only your faith!
MP: We should rise above the level of discussing what thread will look like and whether we’ll have to package doughnuts. EU membership in and of itself won’t bring economic growth, it’s a long process. But as far as I know, you won’t find a single company, a single employer, who will say he doesn’t want to enter the EU. They’re looking forward to seeing space for business opening up.
PM: I’m completely in favor of an open market, but we really don’t need the EU for that. The standard of living has risen, and investors are coming even without the EU. Conversely, I’m afraid that as more and more European standards are imposed on these investors, they’ll leave for countries that are not overwhelmed by EU legislation.

Czech National Bank Governor Zdeněk Tůma said that the necessary priority of our economy is to carry out long-discussed public finance reforms whether we’re EU members or not. In any case, Tůma says that the EU has placed great emphasis on its countries’ budgetary discipline, so if we don’t want to play the role of freeloaders within the EU, we should hurry up. So don’t you think that this psychological pressure is beneficial?
PM: It seems to me that the only pressure the current government feels is concern about an approaching Argentine-type collapse. I can’t imagine how the EU could force the government to cut expenditures.
MP: I’m sure that many laws and regulations in this country were passed solely due to EU pressure. Otherwise there wouldn’t be the money or the political will.
PM: But you have a rather poor opinion of this country, if you say nothing good would happen without EU pressure.
MP: So take a look at our educational and health care systems, and how the coupon privatization was implemented and who made money on it. Only a tiny elite directly connected with the political elite of the time made out well from it. A narrow oligarchy was born, which naturally detested the idea of EU accession, because European methods would start being applied here the moment we joined. It’s no wonder that the ODS says, “Yes, but…”. If we had been in the union at that time, it would have been impossible to privatize the national economy in such a way that it could be embezzled.

Let’s return to the topic of the EU. Who will the final winners be from EU accession, and who will the losers be?
PM: Pensioners have good reason to be afraid, as their pensions won’t rise so quickly, as do people earning lower incomes. The people who will make money will be the politicians travelling between Prague and Brussels, along with translators, interpreters, and importers of EU goods.
MP: I absolutely disagree with this interpretation. Of course it’s necessary to carry out pension system reform and resolve the unemployment issue. But those who think they’ll lose money probably have insufficient information on how pensioners live in Europe, where they’re taken good care of. The unemployed receive long-term requalification incentives, and there are special programs for young people, as well as assistance for afflicted people and areas. Solidarity is the rule in the EU.

Will the economy’s structure change with accession?
PM: At least in the steel industry and agriculture. There is a “commissioner for economic competition”, and this institution has the authority within the framework of so-called anti-dumping proceedings to keep Czech steel-makers from entering the rest of the market by imposing a moratorium on them under some pretext. Czech farmers will not only have to make massive investments in order to meet EU standards, they will also receive subsidies that are 75% lower than those their colleagues receive. In the meantime, the market will be opened to free imports. They won’t be able to contend with this dumping competition.
MP: This is partly because not a single government has the courage to shift from fields with poor prospects like steel-making and metallurgy to small and mid-sized businesses, as is common in Europe. The money that governments have poured into metal works, as if into a black hole, should be used for restructuring. This would be connected with an influx of new technologies and new qualifications. Today Europe calls itself a society of knowledge, wagering far more heavily on services and education. And that’s what the future in this country should be like as well.

How will the Czech Republic be doing in ten years if we join the EU?
PM: I don’t know if the EU will exist in ten years. It’s possible it will break up due to internal disputes. I think that if we don’t join we could be in a better situation in ten years than if we do join.
MP: I hope people will say yes to accession, and that in ten years this country will be a modern, European, open society in which general European rules of honesty will apply, with cleaner overall business and social environments.

How would you like to look back on 13 and 14 June 2003 some years down the road?
PM: After a few years no one will associate these dates with anything. I think that the referendum will be invalid, because in the Czech Republic the question reads, “Do you agree with EU accession on the basis of the Accession Contract?” This means that it’s enough if any of the applicant states rejects it, which would make even positive responses invalid in this country.
MP: I hope these dates will be comparable to 28 October 1918 and 17 November 1989. They will be historic dates when Czechs rejected negative visions and made a positive decision as a self-confident nation.