Sometimes one life can explain the past of a society. The life of this Czech writer, who lives in the US, is a tale of ideals and disillusionment, the confusion of the 20th century, and the search for a higher order.

You write about the horrors of the Holocaust and the time of fascism, and films have been made of many of your books. This year you were even nominated for the Pulitzer Prize for your novel, Beautiful Green Eyes, which takes place in the environment of a military brothel and in which a young Jewish girl survives the war as a prostitute. But your writing doesn’t deal much with the communist era. How was it for you?
We lived on the hope that came with the Russian tanks. I escaped from the camp, I spent a month in Prague illegally, and every day I could have been shot or hanged. Suddenly the Russian tanks arrived, and on them came those beautiful, greasy, eighteen-year-old boys. And we thought that liberation was the idea they brought with them. They put this idea as a beautiful shoe on an ugly hoof, but we saw only the shoe. The beautiful, worn shoe that arrived from Moscow via Berlin to Prague, and suddenly we were free. That feeling of freedom was astounding. 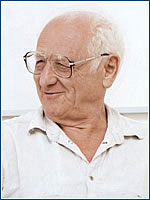 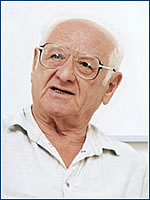 How long did that feeling last?
Ten years. Even the most clever people, like Milan Kundera, Ivan Klíma, and Pavel Kohout took ten years for it to sink in. We were all enthusiastic about Comrade Stalin.

Despite the political processes and all that was happening at that time?
Those processes, they were a shock. But if you believe in an idea and don’t recognize in time that it’s only an illusion, you cling to it as long as you can, because otherwise you’re betraying yourself. For me as a Jewish lad, racial equality was extremely important. In Auschwitz I saw how 10,000 people were being killed every day and every night because of their race. Racism wasn’t a theory, for me it was a user’s guide. Suddenly there was another theory: socialism will bring racial equality, tolerance of all religions, all faiths, and democracy. But only when I once read that Jewish doctors killed Maxim Gorky, my idol and teacher, a cold sweat broke out on my brow. I learned that something was going on that borrowed from Nazism and racism – the nastiest thing that man came to in his degeneration of civilization.

How were you later accepted in America as a former communist?
They needed spurned communists, devotees cast off by the communist party, so we all found a place – Kundera, Škvorecký, and the rest. We all found opportunities undreamed of by, say, Ferdinand Peroutka, who was never accepted by any university in America. True, Peroutka was ten times as smart as all of us together, but they didn’t need bourgeois scholars, they needed communists with first-hand experience.

And did you ever take advantage of your experiences?
After I was accepted by an American university, our department voted for a petition to dismiss a dean. Everyone voted to let her go, and I said I wouldn’t vote in favor. They asked me why. I told them a story to explain my position. Once we met at a communist meeting at Czechoslovak Radio, and the chairman asked us to approve of the execution of Milada Horáková. By the way, her daughter is a friend of mine now. Because it meant solidarity with the party, and because we had never seen Horáková, we all raised our hands. All of us. When I got home that night, I suddenly thought: “how can you raise your hand in favor of someone you don’t know at all, someone you never even met, being killed solely because others claim that she was a traitor?” I couldn’t sleep, and I decided that I would never vote with the pack again, no matter what. So this is what I related in America to explain why I wouldn’t vote to fire the dean, who had always been very nice to me. There was a period of silence, and the others were embarrassed, and then they withdrew the petition. That woman is there to this day.

To what degree have you been able to forgive the Germans?
I haven’t forgiven them. I just tolerate the new generation, because I cannot punish children for the sins of their fathers. After the war I deleted Germany for ten years from my map of spiritual and physical existence. As if Germans simply didn’t exist.

With regard to your war-time experiences, how do you see today’s unified Europe, in which Germany plays one of the leading roles?
I have absolutely no fear of Germans within the European straitjacket. Three of my books have been published in Germany. They asked me how I see them. I said that the better they do, the better I feel. Because a well-fed Germany seems much better to me than the starving Germany following WW I, when it discovered Hitler in order to rectify an injustice with an even worse injustice. Let Germany prosper – it’s in my personal interest. It’s better for Germans to produce Mercedes-Benzes than to wage war.

In your novels there is the recurring theme of concentration camps. How did the concentration camps and the war tear down or build measures of value for you?
I look at a person, and in a split second I discover if he poses a danger to me or is safe. As the American cliché goes, everything I learned I learned in kindergarten – so everything I learned I learned in the camps, before I was seventeen. Three times they wanted to shoot me, and now I’m sitting here eating a double order of carp, and I’m looking forward to a beer. I was in quarantine for the gas chamber, and they didn’t even tattoo me, because I was just waiting until they gassed their quota of Hungarians, after which the Czech Jews were due for gassing. But there were so many Hungarians that we waited for months. No one has to teach me philosophy; I know that I’m alive because they killed someone else.

Can experiences from war and concentration camps even be transposed to the present? Isn’t it something already dead, an atrocity as far from reality as some horror from fantasy?
I’m sorry if it looks like that, because I don’t want to write about horrors. I want to write about what’s beautiful in people. Truly, that beauty brings me to tears. For example, when I hear a fairy tale I feel as good as a little child feels. Because good wins out.

Modern readers could identify with your novel Dita Saxová. This girl survived the war’s horrors, but in the end she killed herself – what killed her was the confusion and relativity that followed the war. Don’t people of today care more about losing their identity than surviving physically?
Dita Saxová says, “Life isn’t what we want, it’s what we have.” This is clear existentialism that includes the past, the present, and the future. The philosophy is that even if a steam roller ran over you and you survived, that doesn’t guarantee that the same steam roller won’t be able to run over you this evening or tomorrow morning. It means that life is inscrutable. I think she was killed by the fact that peace didn’t bring her the fifty years of great life that she dreamed about every day. She didn’t have the courage to live the quotidian life we experience every day. She didn’t have the courage to overcome the anxieties that everyone feels. That anxiety comes and passes. But she thought she was done with all anxiety once the war was over. Life is essentially sad, and it’s essentially miserable. But it’s also diverse, thanks to small things – the episodes of daily life.

How do you see yourself in ten years?
Dead. And before that as an old man with shaking hands and a yearning for beauty, which is reflected in his clouded eyes and his happy expression, that hope is the last thing to die. And that’s also the way I write my books.

How would you describe yourself in three words?
A nice, handsome boy.

How would you like people to remember you?
As a good person who was fun to be with.