Two hours from the alpine ski resorts and three hours from the sea, Lyon is more than worthy of a detour from Paris. With a temperate climate and historical districts that have conserved their architectural character, the capital of the Rhône-Alpes region is best explored on foot. 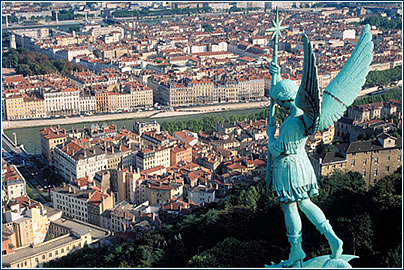 Where on the web?
For further information, we suggest the following websites dedicated to Lyon:
http://www.hotelstravel.com/france-paris.html -a bit limited, but a good starting off page when looking for accommodation in France.
http://www.cybevasion.com/hotels/france/lyon-4etoiles.html -another hotel guide, aimed at the well-heeled traveler.
http://www.kasbah.com/guides/lyons_editorial.htm -nice descriptions and links for many activities in the city.
http://www.blackworld.com/country/france.htm -a portal-type site with avenues to many French destinations.
– billed as “the complete guide to Lyon”, this site offers useful insights and info.
http://www.tripadvisor.com/Tourism-g187265-Lyon_Rhone_Alpes-Vacations.html – articles, books, websites, etc. focused on Lyon and intended to help you plan your trip.

· Lyon was the first French city to exchange currency and the first center of banking in France. The city and its hinterland still account for some 10% of French GDP, and is the largest area for development outside Paris. Other factors behind its success include its geo-strategic position, excellent communication network and the interplay between the private and public sectors of the economy.

· The city is home to a diverse range of businesses. Those that enjoy an international reputation include textiles, chemicals and pharmaceuticals. Lyon and the surrounding area are home to more than 100 hi-tech companies employing some 2,000 people. Additionally, the region is considered the French and European capital for interactive leisure.

· To the northeast of central Lyon is La Cité Internationale, which has been home to INTERPOL, the international police organization, since 1990. For the past couple of years, Lyon itself has steadily had one of the highest rates of job creation in France, particularly in the service sector.