Known as the “City of Angels” in Thai, Bangkok is a historically rich Asian capital with a countenance to the contemporary West. Situated along the Chao Phray River, Bangkok’s tropical climate and well-developed tourist industry make it an exotic playground for a wide range of visitors. 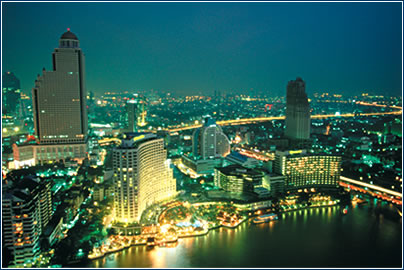 Where on the web?
For further information, we suggest the following websites dedicated to Bangkok:
http://www.worldexecutive.com/cityguides/bangkok/ – A city and travel guide aimed at the business class.
http://www.modernthailand.com/eng/directory/ – For your convenience, you can search for companies, or for information ranging from business tips to names of corporations, product types, email addresses, etc.
http://www.bangkok-city.com/ – A colorful and thorough website that provides addresses for restaurants and detailed information for night life entertainment.
http://www.inm-asiaguides.com/thailand/bangkok/bkkgen.htm – A useful website providing advice on conduct, clothing etc.
http://www.tcc.or.th – the Thai Chamber of Commerce
http://www.thaitrade.com – Department of Export Promotion

· As Thailand is perceived to be at the heart of South East Asia and the gateway to other markets in the region, many multinational companies have a presence in the city. Companies from all industries have offices or manufacturing companies in Bangkok, such as Toyota, Unilever, Procter & Gamble, Philips, Sony, Compaq and even Tesco, who bought a 75% share in a retail group with 12 stores.

· There is still a huge difference in the standard of living between city dwellers and those in the countryside. The national rate of unemployment increased significantly in 2001 to 3.89%, which is comparable to the figure for Bangkok.

· Despite the downturn of business and the erosion of profits for all markets, most foreign investors have stayed put, and favor a long-term commitment to Bangkok and Thailand as a whole.

· The tourism industry accounts for USD 7 billion of the GDP annually.

· Most senior businesspeople in large or international companies will speak English, but it is not common in smaller companies. Punctuality is very important (although the visitor is quite often likely to be kept waiting after arrival) – so the Bangkok traffic must be taken into consideration when going to appointments.

· Thai hosts are quite likely to give small gifts to visitors, so it is a good idea to reciprocate with a typical national gift of one’s own. Visitors should never get angry or raise their voice, if things are not going according to plan, as this will mean the loss of face on both sides. Much more progress will be made by remaining calm.

· Meetings often take place over lunch and are generally held in a Thai restaurant. Thai businesspeople are quite formal in their dress, but because of the extreme heat, it is quite acceptable and practical to dispense with the wearing of a suit jacket. Office hours are usually 0900-1700 Monday to Friday. There is a large expat community in Bangkok, which typically entails a big after-work drinking scene.