When luxury brand names like Herme`s, Louis Vuitton, and Escada landed on the local market five years ago, some said it was just the beginning. But did the fashion invasion actually happen? 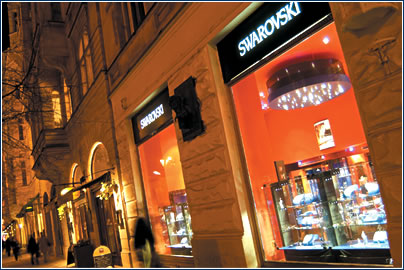 ACCORDING TO world-wide research into the most expensive streets worldwide, conducted by the real estate consulting firm Cushman & Wakefield Healey & Baker, Prague’s Na Příkopě shopping zone rated 18th. Last year, rents there rose by a record 25%, to EUR 1,680 per m2 per year. True, this is a far cry from New York’s Fifth Avenue – rents on that most expensive street in the world amount to EUR 7,967 per m2 per year – but Prague rated well ahead of nearby neighbors Budapest (29th place) and Warsaw (35th place).
This sharp growth indicates that competition on the Czech real estate market, especially in Prague, is rising. In the last several years countless new shopping centers have sprung up throughout the country, attracting many well-known retail brands such as Zara, Mango, and H&M. But while more and more stores focusing on the middle class are appearing, trade in luxury goods is stagnating, in contrast with original expectations. True, back at the beginning of the nineties several brands, such as Ligne Roset designer furniture, Hugo Boss, and the cosmetics firms Lanco^me and Estée Lauder, set up shop here. About five years ago they were joined by such icons as Versace, Louis Vuitton, Escada, and Swarovski – but for now this trend has halted.
” Versace originally had a large store but then had to move to a small one,” claims Jan Králíček, assistant editor-in-chief of the luxury-oriented magazine Dolce Vita. “Pringle closed down, and Donna Karan stayed around for only a few months. There are no Gucci, Prada, Yves Saint Laurent, Chanel, or Vivian Westwood shops here. Why? The local market is too small,” he adds. But many people in this field are convinced that in ten years the situation will have changed. As they say, it’s only a question of time and increasing purchasing power of the citizenry.

New customers are on the way
The limited market is certainly not the only reason why luxury brands and upscale shops aren’t flocking to the Czech Republic. According to a mid-September report in The Wall Street Journal, in the last three years these firms have been facing their worst crisis in a decade. This was caused not only by global economic stagnation, but also by such catastrophes as the New York terrorist attacks, the SARS epidemic, and the war in Iraq. These events affected the travel industry, on which the luxury goods trade depends, so most of the leading brands suffered falling revenues. “Many of our suppliers are having survival problems,” says Aneta Rašovičová, the owner of Linea Pura, a furniture and accessories vendor.
The Czech market was also hurt by global events that entailed a decline in the number of foreign visitors. But according to luxury brand vendors, the customer base is slowly changing, so the decline in the number of tourists is partly made up for by increasing numbers of Czech clients. “Eighty percent of our customers are Czechs,” claims Miloš Staněk, the general director of Potten & Pannen, which sells kitchen products, including Rosenthal porcelain. The typical customer spends up to CZK 50,000 at the store, and other vendors are reporting similar numbers. “Ninety-five percent of our shoppers are Czechs who live in Prague,” says Jindra Kramná, an interior decorator from Ligne Roset, adding that in the early nineties shoppers were mainly foreigners or expatriates who knew the goods from abroad.
This change is entirely logical. The more Czechs travel and open up to the rest of the world, the better educated they become in the areas of design, fashion, and quality, so they also become more demanding. Besides the so-called upper ten thousand – comprised of top company managers, entrepreneurs, artists, and expatriates – a new potential clientele is being recruited from today’s generation of thirty- and forty-somethings who are at the peaks of their careers and have money to spend. “I think this is natural behavior. In the beginning quantity was the most important thing, but once you’ve satisfied your basic needs you want something more,” says Mária Gálová, the director of the Dorotheum auction house, which has been active on the Czech market since 1992, focusing on the sale of jewelry, 20th century paintings, and porcelain.
But unlike western countries, in the Czech Republic people from the middle class save up to buy luxury goods. They are interested mainly in small items like fashion accessories, which is why small handbags or belts by Louis Vuitton are popular items here. According to Kramná, Ligne Roset is accessible to all shoppers, because if someone likes the style but can’t afford a CZK 200,000 sofa, they can still buy a small lamp, for example.

Location is everything
In Prague luxury goods shops are naturally concentrated on Pařížská street and around Old Town Square. This is due not only to the area’s attractiveness for tourists, but also its greater concentration of residents with higher incomes, who rent luxury apartments and offices in historic buildings. But according to Martin Žížala, the manager of the retail department at Cushman & Wakefield Healey & Baker, the amount of suitable space in this area is limited (in terms of numbers and size), so other businesses are beginning to look elsewhere. “For example, furniture vendors need a lot more space, so the Vinohrady area is of interest to them,” Žížala explains. The number of newly opened shops on Vinohradská street, such as Living Space and Scavolini, seem to bear him out.
The same is true of Holešovice, where companies like Vitra and Koncepti that sell designer furniture and accessories have chosen to locate their headquarters. Once considered “out of the way”, this district now has a chance of becoming the design center. Abandoned factories in this formerly industrial quarter of Prague draw innovative architects, who have converted many of them into lofts that will surely not rent or sell cheaply. Karlín, once an industrial zone, is being similarly developed. One reconstructed factory has been converted into the headquarters of the Czech architect Mojmír Ranný, who moved from the city center. His company, Ranný Architects, is the exclusive vendor of furniture and accessories by companies like Wittman, Cappelini, Montis, and Fantoni. “We want to concentrate more on the office furniture market. Here (in Karlín) many new offices are being created, and we’re also in closer contact with developers,” explains Ranný.
Although at first glance Czechs may not seem very interested in luxury goods, the boom in shops that carry expensive designer furniture and accessories announces that a change is occurring in how people perceive the term. “Luxury á la Ivana Trump is an anachronism – today what counts is originality, uniqueness,” opines Králíček of Dolce Vita. According to some of the city’s upscale retailers, Prague has great potential to become a major European shopping mecca. “Prague has been and will continue to be a common place for buying luxury goods and fashion,” Žížala claims. Time will tell how the local market shapes up compared to the relatively affluent cities of the west, but flying to New York for a shopping spree will always be an attractive option for those who can truly afford it.