Chosen by George Washington for its strategic location and designed by the French architect Pierre L’Enfant in 1791, the U.S. capital boasts green parks and wide tree-lined streets, as well as such grand structures as the White House, the Washington Monument and the Lincoln Memorial. 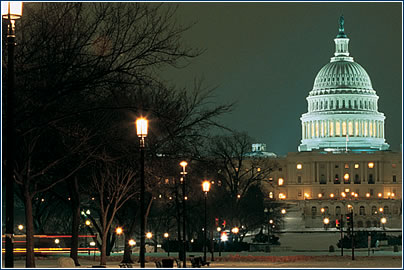 Where on the web?
For further information, we suggest the following websites dedicated to Washington, DC:
-this city-specific search engine and portal page is like having the phone book at your fingertips.
http://www.digitalcity.com/washington/ – a good site for finding events and planning entertainment.
http://www.worldexecutive.com/cityguides/washington/ -aimed at the business traveler, this is a useful site for accommodation and sight-seeing.
– web site of the convention and visitor’s association.
http://www.lonelyplanet.com/……/washington_dc/ – a “liberal” overview of the nation’s capitol, from the folks at Lonely Planet.
http://www.allaboutwashingtondc.com/ -an informative, if somewhat generic, guide to travel and tourism in Washington.
http://www.washingtonian.com/ – this online magazine serves as an “insider’s guide” to the city.

· Federal government departments, such as the Department of State, the Treasury, the IRS, the Department of Justice and the US Supreme Court, make the federal government Washington, DC’s premier industry. Although Pennsylvania, New Hampshire, Massachusetts and New York avenues border the main business district, other areas of the city are beginning to attract corporate business.

· The city’s next most important industry is tourism. Within the DC area is the fourth largest concentration of hotel rooms in the USA. Approximately 20 million visitors arrive each year, to explore the wealth of free museums and attractions in the city. The city has also attracted the headquarters of organisations such as Marriott, Amtrak, Mobil Oil, MCI Telecommunications, Gannett News, US Airways, the World Bank and the International Monetary Fund (IMF).

· Generally, American businesspeople are more informal in their work attire than Europeans are, although in Washington, DC, men always wear suits and women stylish and conservative business attire. National and international organizations tend to be more formal, although smaller companies now operate a smart-casual clothes policy. Although working hours are often much longer, business hours are generally Monday to Friday 0900-1730.

· It is quite common for meetings to be held over lunch, although the prohibitive cost of eating out in the city at traditional business venues means that some companies bring in outside caterers to the office for important, large-scale lunch meetings. Business dinners tend to take place in restaurants rather than at home. Cocktails after work are commonplace. The use of business cards is routine.