Set designer and sculptress Katarina Kissoczy has found an unusual sort of artistic expression: a wooden jigsaw puzzle. She has thus connected the apparent content of the work with an element of spontaneous playfulness.

THIS SLOVAK with a Hungarian name, who studied set design in Prague, is indebted to her own father for her original puzzles. “About fifteen years ago he gave me a saw as a present, along with four large pieces of plywood. At first I didn’t know what to do with them, but then I started sawing and discovered the lines of something specific in the spontaneously created shapes,” the artist recalls. “I discovered that the individual pieces of the puzzle could form separate pictures, unlike in a classic puzzle, in which the overall picture is broken down into small pieces. In my work each piece has its own meaning,” she explains. First she made heads that fit together, and then she thought of also making hands, people, or animals. On her rounded, oval, or otherwise “scenically” shaped pieces she creates a labyrinth of stylized figures and other details. For example, they depict a thoughtful head full of heads, interlocked hands that will never come apart, or a talkative mouth made up of smaller mouths. Former US First Lady Barbara Bush received the latter as a gift from the wife of the US ambassador, Craig Stapleton.
” Each puzzle is also a picture, an original. You can hang it on a wall and still play with it,” Kissoczy says. But you can also play with her other objects, perhaps a mirror with side wings shaped like a human profile that can be opened or closed, so that you can see your reflection or hide it inside. Larger creations for interiors are built on the same principle, such as the spacious tree of life that the artist created for a retirement home in Dresden. Kissoczy rarely exhibits her work in the Czech Republic, with the exception of a recent exhibition at the Art & Decoration trade fair. However, her many exhibitions, awards, and engagements in trade fairs in other countries confirm that she is going ever further afield with her activities. Thanks to her regular presentations at the International Gift Fair in New York, she receives orders from all around the world. In Prague you can choose from these witty items at Galerie Tržiště 3, just below the American embassy. 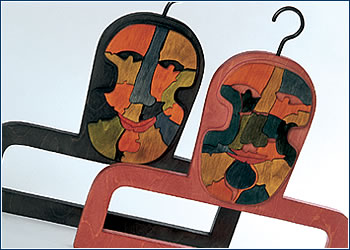 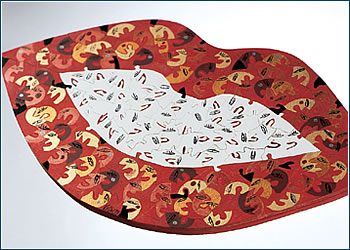