The director of the rescue service, Zdeněk Schwarz (41), talks about the specifics of being a boss in a job in which risks, emotions, and adrenaline run quite high. 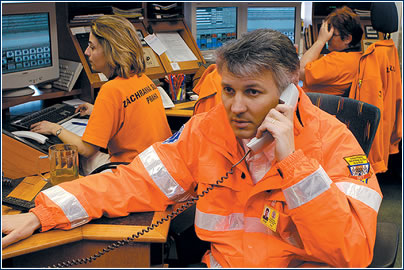 What is the typical profile of a person who applies for a job with the rescue service?
Our employees are specific individuals, but what they all have in common is something I call Rescuer’s Syndrome. I divide them into several categories. First, people who have a desire to rescue and help others. The second group is made up of medical specialists that like to work in crisis situations – for them it’s something like an adrenaline rush. I personally like these sorts of people and think they predominate here. Third, there are some employees with inferiority complexes that they try to balance through their work with rescue service – there they can feel like the hero of the day and satisfy their egos.

People remember the series from the 1980s called Ambulance that presented rescue service as a repository of unadaptable eccentrics and alcoholics. What is the reality?
A certain portion of our employees meet these characteristics, leftovers from healthcare and other professions. We have managed to mould some in our own image, but there are still some individualists who have a problem adapting to any team. They often lose their jobs, and end up giving it a shot here.

Is there any room for individualists in rescue service, or is it all about teamwork?
It should be like that, but unfortunately sometimes it isn’t, and this is also the reason why some of our employees have been attacked out in the field recently. The crews weren’t working as a team; when they were attacked, everybody ran away, thinking only of themselves. I see it as a typical failure of individuals. We have been trying to recondition them, train them, and strengthen team spirit through social, cultural, and sports activities.

How do you explain the growing number of attacks on rescuers?
Aggressiveness and arrogance are growing enormously in society. A rescuer faces risks just going through a red light, sirens wailing. Other drivers don’t pay attention to them because they’re making calls or listening to the radio and so they don’t pull over. We encounter psychiatric patients whose behavior can change in a second, suddenly ramming scissors into your back. We encounter shoot-outs, fist fights and people from the underworld. Last year we recorded 18 attacks, and in just the first quarter of this year we’ve had 20! We have always faced aggressiveness, but our personnel is well-qualified and intelligent, not the type to get involved in fights.

Didn’t the attacks cause an exodus to other professions?
No, our people work in all types of environments – out in the field, in construction, in factories or in pubs. Often, they not only have to watch out for the patient, but the surroundings as well. One example: we are in a pub where men are fighting, and beer mugs are flying everywhere. We are an obstacle to their entertainment. The drunks are throwing insults, kicking our bags and instruments. And in these conditions you have to save human lives. This is a normal aspect of our nightly duties.

Is it true that you once had a gun put to your head?
Yes. We got to a dead man and I told the family that I couldn’t help him anymore. At that moment his son jumped out, put a gun to my head and yelled “Do something you idiot, save my father”. In a way I can sort of understand it, because in such cases people act instinctively. So it is necessary to be prepared for these situations, such as through the self-defense courses we introduced for our employees.

There’s a rumor that rescuers make good money. Do you consider money to be an important motivation?
The average wage of a rescuer is CZK 24,500, and for physicians its CZK 46,000 gross. Many people envy this kind of money, but I think that rescuers deserve it, especially when you consider how stressful the job is.

Who calls 155 most often?
Anyone who has an acute health problem, but the line is sometimes abused by people whose treatment could wait. Also, a certain anti-social group of people always call 155 because it is free and easy to remember.

How are calls organized?
Our operators accept calls 24 hours a day. We now have eight operators who are all experienced nurses. They immediately process the information and pass it on. According to the edict of rescue service, response time must be within 15 minutes, but in Prague our average is eight minutes. Prague functions in a so-called rendez-vous system, which originated in France – a paramedic and a driver create one crew in a small car, and the second crew is an ambulance where the driver is a paramedic and healthcare worker. These two crews meet at the location and then separate once again when the ambulance takes the patient to the hospital.

You and your colleagues helped to overthrow the management in 1998. What type of boss are you? Do you see areas for improvement?
I’m strict, but I can admit mistakes and accept other opinions when they are better than mine. I am accomodating and friendly when employees fulfill their duties. I am not forgiving of shoddiness and dirty tricks. People reproach me for not praising others enough. That’s true. I want people to always give one hundred percent and I’m not good at tolerating insufficiencies and slowness.

Are you satisfied with the results you have achieved in your role as manager over the past six years?
Yes. I am glad that City Hall trusted me and gave me the opportunity to implement a new concept for Prague Rescue Service. I consider that system to be a big success. But we still work in a rented building with a capacity that is not suitable, and we pay commercial rates. I wish we had our own headquarters, with a new operator room and all the latest technologies.