“You’re born into design, and you die in it. Everything is design, and people are surrounded by it, even to an unhealthy degree,” says designer Jiří Přibyl from the two-man studio Koncern.

JIŘÍ PŘIBYL AND MARTIN IMRICH have a lot in common: the studio, which they founded at the beginning of the new millennium, industrial design studies at VŠUP (Institute of Applied Arts) in Brno, and even their preceding education. “We were both trained in the field of engineering, and it often turns out to be the most important preparation we had. We have a specific concept of technology, and for a designer this is a great background,” Přibyl explains. “We design everything as a team, because thanks to our communication the result is far more refined. When you arrive at a certain phase with a creative design, it is very healthy to have the other person take over and add a new dimension,” adds Imrich.
The modus vivendi at the Koncern studio is a certain subliminal element and a slight guilefulness. “We work with the basic cultural code each of us has inside, and we try to somehow transform it. For instance, everyone knows what ‘contour lines on a map’ are, so this evokes certain associations and an immediate reaction to the item,” says Přibyl of the Vrstevnice (Contour Line) couch, which was introduced at Designblok ’03. The individual segments of the couch are copies of contour lines lifted from a map and morphed into an ergonomic shape. They also borrowed the colors of hiking route maps, so the couch seems a bit socialist-era, but thanks to the high-quality fabric, its appearance is very fresh.
The most frequently published work of the Koncern studio is the Merkur aquarium, with a convex face, which even appeared in the Czech film, Road From the City, and a cane armchair woven in various sizes from L to XXL, according to the client’s build. “These projects come about spontaneously, they are not ordered. And because they have something to say, they draw attention,” Imrich says.
Another activity of the Koncern studio is product design for industrial manufacture. Common are orders for designs from major foreign manufacturers, such as designs for children’s car seats or bathroom accessories. “Our manufacturers don’t want to put too much money into product development, they are lacking the ability to believe in innovative ideas,” Přibyl complains. Nevertheless, Koncern has been able to see through its creative designs in many cases on the Czech market – from a bicycle pump and designs for PET bottles to office furniture or a bedroom suite. 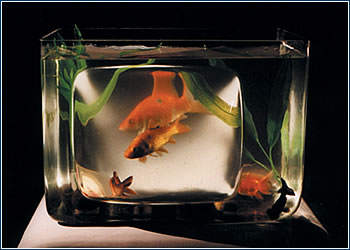 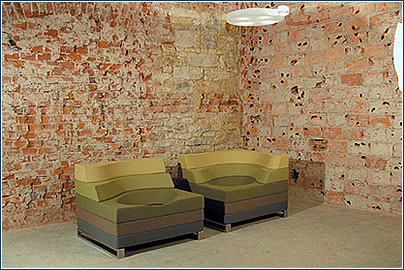 Armchairs Bráník, Contour Line set –
each segment is a copy of contour lines lifted from a map 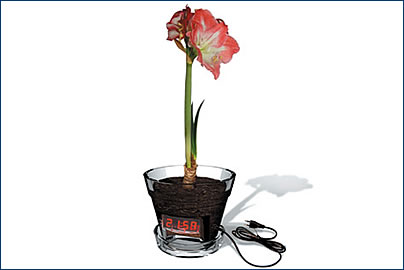