They say he’s a dictator, a fanatic. Not so. “Franz” Straka (45) is a brilliant soccer coach who’d go all out for his team. And Sparta follows his instructions and wins.

Your coaching results are outstanding. Twice in a row your teams have won the Czech-Moravian Soccer Union Cup (ČMFS) – last year Teplice and this year Sparta. You also led Sparta to the Champions League qualifiers. Are you satisfied?
Absolutely. Coming to Sparta this March was a huge risk, but I trusted myself to be able to lead the team to the qualifiers no matter what.

In the ’80s you played for Sparta, and now you’re the coach. How did you earn the players’ trust and respect?
You build respect from what you’ve accomplished, and I’ve done well in this country and abroad. If someone came here looking for success the players would scorn him. I told them up front: “I demand discipline and devotion to our joint goals on the pitch. After the season ends you can do what you want, but now we have a common goal, and you’ve got to focus on it!” We went onto the pitch and I became one of them.

What are the main principles of your coaching philosophy?
First, the players must have a good attitude towards the club. If they don’t play their hearts out they have no business here. My job is to awaken this passion. Then there’s their self-discipline. If I coach someone for a week and then he gets drunk at his first chance, it’s all to no avail. It’s all based on the player, who must respect and trust his coach, and vice-versa – I trust my boys.

A popular leadership tactic is choosing an “ally” on the team to prevail on the others. Do you have such a favorite?
It’s hugely important to me to have Karel Poborský. He’s a great personality, a well experienced, intelligent lad. He’s my partner, and we discuss the squad, as he’s their leader. We talk about the lineup and our game plan. Karel has great natural authority, but he understands that the team is more than just him, it’s a unit that works together. It was fantastic to see how he, Blažek, Kouba, and Barák adopted my mission and passed it along to the others. 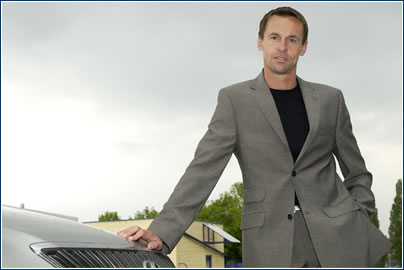 What is the ideal coach?
I think a carrot-and-stick approach works. Along with respect there has to be enjoyment, rituals. For instance, each morning I shake hands with all the players. A coach should also be a friend – the guys have to know that Franz is there, that we’re all in it together. Additionally, I’m very religious, and I try to pass this on to them as well. My strength is my energy and drive. My wife even says I’m able to unbelievably fanaticize people (laughs).

Do you have shortcomings that make coaching hard?
I’m very volatile and emotional. I’m also stubborn passionate, and I have a lot to learn about tact, but I’m constantly ready to improve myself.

The public often sees soccer players as pampered with money. What gives your players their greatest motivation – money or winning?
Money’s always been the motivation. When in 1979 I sputtered to Sparta in my Škoda 120, what do you think I most wanted? I wanted a good car, a good wife, a house, nice clothes. But there’s a lot of envy here. When I returned from Germany, fans shouted, “He’s all set, the fascist!” Today I have German citizenship, and I live in Koln. As with Pavel Nedvěd, it isn’t the money, it’s about winning with the best playing and the best players.

How have the recent corruption scandals in the First League affected your players’ psyches and your own?
Unless it directly involves our team we try not to think about it. In general, I think it was only a matter of time until the corruption was revealed. And I’m very glad something finally happened. When I was coaching at Teplice I sometimes doubted the regularity of some matches. Until we purge the Czech league of corruption the world won’t accept us as full-fledged partners. It’s a pity.

Do you hang out with the players after work?
I did in Teplice, and it was great. I haven’t been with Sparta very long, so there hasn’t yet been time. A coach is a coach, so I have to keep a bit of a distance. When they’re celebrating a Cup victory and the Champagne is flowing, I leave after a couple of hours so the guys can party on.

What misbehavior will you tolerate, and what do you punish uncompromisingly?
Someone might be late due to traffic or a family problem – I respect that. But if someone turned up drunk he’d do it only once – I’d let him go. I can’t stand lethargy or frivolity – if people are late just because they didn’t plan their time properly. The fine for being one minute late can be as much as a thousand crowns. It’s up to me.

What’s the most interesting thing about coaching?
The challenges that you face. You feel like a wizard with a wand who should turn everyone into a Zidane or a Ronaldo. I’m glad God gave me a chance to work with the finest players. It’s fantastic when they listen to me and pursue our goals, and I can carry them along. Of course losses will also come, but they should only draw us tighter together.

And what’s the hardest?
Communicating with officials. Sometimes you have to struggle with people who have no idea of what soccer’s about, but who are just exercising power. It often requires more energy than working with the players.