Architecture student Jaroslav Koza claims that design is his hobby and that he strives for “architecture plus”. But so far he is best known for his high-jinks with laminates.

“DESIGNING A BUILDING involves far more responsibility than experimenting with objects like sculptures or furniture,” says Koza. In his final year of architecture studies at VŠUP (Czech Institute of Applied Arts), Koza sees this as the difference between architecture and design. He realized his first large commission, the reception area in the Eurotel building in the BB Center, in the studio of Professor Jiří Střítecký. The reception area, which he designed with organic morphology to contrast with the severe shapes of the building, is somewhat reminiscent of the human ear. He created it from laminates in a manner similar to yacht-building technology. “It’s exceptional in that it was built directly, without requiring form construction, which markedly cut its cost,” the designer says.
Developing the reception area was so interesting that it loaned a hallmark to Koza’s other products made with laminate technology. His popular collection of seating furniture, Somersault, Lazy-bones, and Udder, is more intimate. “I tried to use the typical features of laminates that allow it to be shaped like a shell, and through this the structure took on a huge, spacious rigidity.” The multifunctional somersault, which can be turned over to serve as an armchair, a bar stool, or a rocking chair, is a typical design product that garners far more kudos at international exhibitions than sales in this country. Koza strives to free himself from the vicious circle of Czech design – e.g., the Ego, an egg-shaped table fridge he designed together with his colleague Martin Sladký as a corporate product for Becherovka. Perhaps he’ll succeed with children’s products – like the innovative concept of a Lego-type airplane with simple but effective bow-shaped wings (patent pending). His Snout speakers should meet a trend among young people who want an original appearance to go along with acoustic quality. The Snout is to be presented as a surprise at this year’s Designblok.
As for Koza’s style, he strives for the function and character of the materials from which he designed the product, rather than perfect shape.
” I won’t deny that natural forms don’t fascinate me; I’m far more interested in the principles whereby nature enters into them.” Demonstrating his approach as an architect, Koza’s almost surrealistic fountain, reminiscent of a living creature, is nearing completion in a České Budějovice housing project. Several development firms have shown interest in his fascinating Water Lily project, a café floating on the Vltava that would markedly enliven the river. 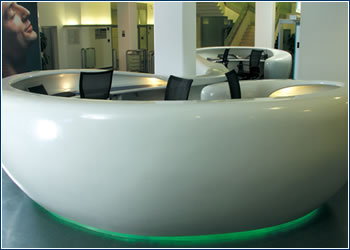