Written by: Jason Hovet, Philippe Riboton
Photo by: Vojtěch Vlk
He’s the new vice prime minister in charge of economy; but he’s mainly the young smiling face of the Czech government. The Prague Tribune brought three business leaders to Martin Jahn’s office in order to ask him what his plans are.

The Prague Tribune (PT): This new government looks surprisingly similar to the previous one. What will actually change?
Martin Jahn: What this government could do better is to prioritize things, finalize them, and then present them. There are many issues that the previous government had been discussing but which were never solved, for example, bankruptcy legislation. Things also weren’t presented very well to the public so people think the economy is in bad shape. But the economy is doing quite well, so people should have a better feeling about it. Also, I don’t think this government can come up with something totally new in the next few years…we have to finish what was started, and that’s the main goal.

Pavel Sláma, general director, Datart: My concern is if it’s possible to get through all the issues that are on the table in two years. But, based on the record you had at CzechInvest, I’m very pleased you joined the government.
Jahn: There is a huge difference, though, between what I did at CzechInvest and what I’ll do here. At CzechInvest, I was dealing with a relatively small number of issues, and the results were very clear and achievable in a relatively short period of time. Here I’m responsible for a very wide range of issues and the results won’t be so easily presented. Of course, in two years you can do a lot.

Dirk Kroonen, managing partner, Ernst & Young: I would like to see some progress in two issues – bankruptcy legislation and the commercial register. What are the major hurdles in implementing new legislation in these quickly?
Jahn: Reforming the commercial register will be easier than new bankruptcy legislation. For the commercial register, I think we should accept the ODS proposal in parliament now. If this happens then, as of January next year, we can start with the new system. I don’t see any big hurdles here, except for the government to accept a proposal from the opposition.
With bankruptcy legislation, the problem is that we don’t have a law that would be acceptable for the government. We have two proposals, but neither is good. So we have to very quickly put together a group of experts and agree in the government which law could be used as a model – the German, American or British. And then, based on what we already have, we can prepare a new law, discuss it with the business community and send it to the parliament. It is still feasible to achieve it by the end of this year, and can start by the middle of next year. 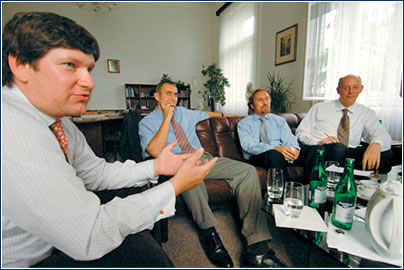 PT: But these are issues that have been on the table for years. How do you plan to clear them up in two years?
Jahn: There was a lot of discussion before but we couldn’t even find agreement in the business sector. We were fairly criticized for a lack of coordination, but there were strong disagreements between various professional groups and it delayed the process. But let’s forget about the past. A new law is doable. I will do my best to achieve it.

Kroonen: Are there plans to cap the social security premium paid by employers?
Jahn: We need to do two things. First, to introduce the cap – and this could be done within these two years. Then we need to consider lowering the rate in general, which probably won’t be done in two years, but could still be proposed or approved by the government by 2007.

PT: For small- and medium-sized enterprises (SMEs), finding money can be difficult. One problem is that banks lack universal guidelines about, for example, what constitutes an SME. What could you do in your new role to help this?
Jahn: I think the major issue is bankruptcy legislation: banks are afraid of not getting money back from failed SMEs. Banks are working on unifying statistics, but that’s really an issue for the banks. It is causing problems for them, and for us, to have some sort of overview of what the SME sector is and wants. For us it creates problems when we start programs to support SMEs, but these problems are not major.

Nils Jebens, owner, Kampa Group: I think that if I were to start a business today, the tax laws are so complicated, it would be discouraging. What can be done to simplify this?
Jahn: We want to do three things. First of all, the tax code could be freed of some administration. For example, company car administration. Second, we want to have electronic exchange of data between entrepreneurs and government offices, especially tax and customs offices. I think within two years, all filings could be done over the internet. Third, we would like to create one government agency for unified filings; this could also take place within the next two years.

Sláma: Electronic signatures, though, cost too much. If it becomes policy it should be, at least at first, free to use.
Jahn: I don’t think we can subsidize it, but providers should be interested in having a cheaper e-signature because it would increase their traffic. But I am quite aware the price of this electronic signature will be a hurdle.

Kroonen: For entrepreneurs, it seems there isn’t a lot of information about how to apply for EU structural funds. Also, I think there is some concern about corruption in the system.
Jahn: I cannot agree that there is not enough information about structural funds for entrepreneurs. We already have three times as many applications as we have money. So I think anyone who wants to get information can. As for corruption, I don’t see it. I was involved in the preparations for these schemes, so I’m quite confident they are very open and transparent.

PT: With unemployment, you’ve said before you think it could be reduced to 8% within two years through better conditions for businesses and more flexibility in the labor market. Can you be more specific?
Jahn: What I said would be the best result in fighting unemployment is if we reach 8%, not that this was our target. I think it’s impossible to go lower than this in only two years.
We can fight unemployment by supporting business in general: by incentives, by supporting SMEs, good legislation and so on. A flexible labor market means that social and health care benefits are not misused. Better movement of people can be created either by deregulated rent or more new houses.
By the way, unemployment here is very good compared to our neighbors. This economy is creating a huge number of jobs; the problem is restructuring. You see added value growing and companies here are much more efficient. So I don’t think there’s much room to bring down unemployment.

Jebens: One way would be to cut social benefits. I can tell you, it is very difficult to get low-qualified staff, especially in Prague, to do certain jobs.
Jahn: Well, this social democratic government will not cut the unemployment payment. I’m sure they will take steps to make the market more flexible – not by cutting, but by forcing people to take a job that is available to tackle long-term unemployment. One proposal from the Ministry of Labor gives tax benefits to people at the lowest wages so that they actually make more and are interested in getting work.

PT: Related to job creation, the Slovak government has done a lot recently to attract more foreign investment. Do you see this as a challenge to the Czech Republic?
Jahn: Total foreign direct investment (FDI) in Slovakia is 50% of what we have here. So they still have to catch up. The main reason for FDI going to Slovakia is their absorbtion rate is higher and labor cost. I personally think Slovak reforms are aggressive but I want to see more results. They still need to build infrastructure and spend more on education.

Sláma: Do you think that by putting a cap on social security and health insurance it would make labor slightly cheaper and be more attractive for investors?
Jahn: No. We do that for retaining well-paid people. We need researchers, managers, health specialists, and so on. We do this to help these people in the Czech Republic, but it has no effect on blue-collar workers.

PT: In the business community there has been and still is a lot of suspicion toward Prime Minister Stanislav Gross. Are we to believe that you are to be the “lipstick” or the friendly face for the new government? [laughter] And how will you deal with Gross’ reputation in the business community now?
Jahn: So you are afraid that when you wake up in the morning, the lady will be pretty ugly. [laughter] I know there was a lot of speculation about some of the prime minister’s past. From my personal dealings, I have no suspicion. If I knew there were some serious problems, I wouldn’t have joined the government. As far as lipstick, I think some things need to be communicated better. But I didn’t join the government to be only a communicator. I have a very clear agenda: improving business climate and legislation, economic policy and also raising the profile of the Czech Republic in Brussels. I will voice my concerns about these things within the government. But on the outside, I will be quite loyal. I think good things can be achieved over the next few years.