He was a dissident, laborer, writer, and screenplay writer. Thanks to his experiences, this Czech country rabbi has authority beyond the Jewish community, so we spoke with him about the roles of religion, values, and the war on terrorism.

Judaism remains surrounded by many mysteries. Do you think it’s necessary to communicate more, to elucidate the differences between religions and what they have in common? What are you, as a rabbi, doing about it?
The whole time I’ve been a rabbi I’ve tried to demystify Judaism. Of course it has a touch of romanticism, but Jews are normal, they have one head and two eyes, like everyone else. Their only differences are their beliefs, their faith, and their approach to education. Hardly anyone knows that since the first century AD Jewish children have had mandatory schooling, and education has been seen as very important. People are more concerned about what they don’t do than what they actually do. This has created legends that are bound to anti-Semitism, because in its own way anti-Semitism is a legend, too.

Why is the Jewish nation so hated?
Jews became the focus of envy, which is baseless. Anti-Semitism attributes to Jews certain exaggerated characteristics, resulting in a theory of a general conspiracy against the poor other nations. It’s nonsense, but very persistent, it goes back to ancient times – anti-Semitism is traced to Egyptians in the third century BC.

Does religion have something in general to offer today’s youth?
It evidently offers them something; see the development of Islam in recent years. But what good does religion offer? I think that in religions, even Islam, one can find common points. I’m not talking about theology, I’m talking about family, about respect for parents, and about sexuality. Religions look at everything that’s ailing in western society differently, but they have much in common. Their influence on youth, if it were intelligent, could certainly help our society, which suffers from the blight of western European cultural values.

But many religious practices and rituals can seem obsolete. Don’t you think they should develop with the times?
There’s always conflict between tradition and the new things time brings. But you have to be careful, because traditions are verified by many generations. We’re living through the technological revolution. Indiscriminately rejecting technologies is stupid, but accepting everything without analysis of what it is and how it’s used is worthless. 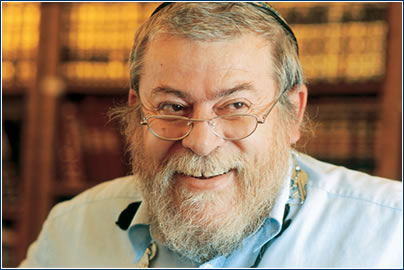 But let’s look at the position of Jewish women, for example. They can’t study the Talmud, they have limited access to synagogues, and their sexuality is essentially limited to reproduction. Why should modern women accept something like this?
The Jewish religion is built mainly on laws – rights and obligations. Women are exempted from time-linked obligations. They aren’t obligated to pray thrice daily, only once, whenever it suits them best. Synagogues were originally really for men, as they are obligated to pray together. The study that requires concentration and time is the obligation of men. But that doesn’t mean women mustn’t pray thrice daily or study! But through their entire character, women are much more bound to caring for their families, and this function is highly venerated in traditional Judaism. In my opinion this is the basic problem of modern culture – women are not as appreciated in their female roles as they deserve. The key is in satisfaction in service to society. It doesn’t work here, and women can gain renown and success only by acting like men.

The Czech Republic was recently praised by EU representatives for its care of Jewish monuments – they said it could be a model of cultural relations for many other countries. Do you share this opinion?
In principle, yes, but not that it should be a model. The cemeteries and synagogues were returned to the Federation of Jewish Communities in deplorable condition. Without the help of the non-Jewish communities and towns, we’d never have been able to do so much work. Today’s relations with the Jewish community are good. I’m just concerned that under the stronger influence of western European countries the Czech Republic will become more like them. We’ve always thought that anti-Semitism is, at least for the west, a thing of the past – but now, under pressure from Islamic minorities, their politics towards Jews are changing. Today it’s in fact harder for Jews to live in France than in the Czech Republic.

In today’s multi-cultural France, they have many problems with religion. For example, they recently passed a law that children must not wear external symbols of their religions at school. Are you afraid of such pressure here, too?
I had a similar case here recently. One of our boys went for his internal passport photo. He was wearing a yarmulke and encountered a policeman who insisted it was an official act. But he wanted his picture with his yarmulke, as he’s obligated to wear it. The complaint reached the Senate, and me as well – I had to make a statement. I discovered that he was right, because nuns can be photographed with their heads covered. I don’t think the French solution is correct. Parents will take their children to their religious schools, and the influence of emancipated France will be much weaker on this generation. Worse, these children will be much more heavily influenced by crazy spiritual leaders.

The international situation is becoming harsher. Do you think the terrorism that is becoming more widespread is a legitimate means for the weak to fight against far more powerful enemies?
Unfortunately, the western world is terribly selfish. When only anti-Israeli terrorism was involved, everyone pretended nothing was happening. But they gave terrorism the green light, and today it’s spreading, so their heads are spinning. It may be too late. Unfortunately, now it’s a general habit to make demands, and to force victories through illegitimate means. Somehow it no longer applies that there are limits that must not be crossed. On the other hand, I think the western, globalizing value system gives an opportunity to Islamic radicals. It’s basically built on the libido of the individual, which is also reflected in the western concept of human rights. The gap between civilizations is widening.

What can be done about it?
It’s crazy, but nothing’s to be done. Security forces and the army have to handle terrorism. However, the drivers of globalization should be aware that not everything they stand for is good. The blindness and momentum are so great that probably nothing can be done. Maybe representatives of various religions could still play positive roles, but they prefer spending their time on theological dialogues, and instead of working together to create an atmosphere for an internal transformation of the views of their citizens they argue about what they can’t agree on anyway.

Do you think intervening from outside in the matters of a given country is justified, even when – by western standards – the citizenry is denied basic human rights? Such perceptions can be very relative, can’t they?
It isn’t a question of western standards, but rather of experiences that are even specifically Czech. If at the time when Hitler was gaining power there had been a force to oppose him, it would have saved tens of millions of lives. If the western world had then stood up against Nazi Germany, it would have certainly been good. There would have been the same arguments as there are today against the war in Iraq, and many people would surely be wavering as to whether it was right, because they wouldn’t know what would happen it they failed to act. But we know now. If the west intervened only militarily, without trying to interfere socially by exporting their consumeristic value system, and if the military presence didn’t last longer than it had to, it would be OK.

Although very young, prime minister Gross has surrounded himself with people connected with communism. Does it frighten you, as a person who had very negative experiences with the former regime?
I basically see no threat. I don’t know Mr. Gross, but I get the impression that his political methods reflect the upbringing of his generation under late communism. The politics simply captured the generation that came of age when lying and stealing were part of the values, and now it’s showing up. I don’t see much in high politics, and I don’t particularly want to.