ALENA MATĚJKOVÁ, who is currently completing her doctoral studies in the glass studio at VŠUP (Institute of Applied Arts), first hews her often bulky statues from granite and then casts them in glass. So in fact twin statues, made from different materials, are created. “I don’t polish the glass too much, and I don’t try to make its surface technically perfect. By casting the glass in stone I lend it a rough, natural character, a nice thing to look at and touch,” the artist says. “Perfect polishing of glass and its exact geometrical shapes leave me rather cold.”
Experimenting with surfaces is typical of Matějková. During a stay in Scotland, she visited graveyards and took “rubbings” of medieval ornamentation from gravestones. She used clay instead of paper as a template to create, for example, fantastic collections of huge teapots on wheels, as if they had traveled from ancient times. “The heavy colossuses cast from glass that are teapot-themed statues bear the names of real and fictitious Scottish kings, such as Fergus Mor of Daldriada,” she explains. Last year she again went to collect ornaments when studying at the university in Sunderland, England, using them for large glass sculptures – “Flying Carpets”. Weighing 300 kilograms and measuring 180 x 135 centimeters, they are the largest glass statues ever made in the UK. In November one of the “carpets” will be exhibited in Nosticův palác in Prague, and will then travel to Aichi, Japan as part of the Expo 2005 accompanying exhibition.
Although Matějková prefers free creation, sometimes she likes to design small utilitarian items. The less she really works on design, the more she maintains a novel view of an item. Last year she created an oval teapot that is interesting not only for its combination of porcelain and neon-yellow glass, but also for its witty finesse – both sides feature deep finger holes that facilitate pouring. It’s called “Hot Hole”. It received such positive responses at exhibitions abroad that Matějková decided to produce a limited series with small bowls as a tea set. “When designing I like immediate reactions, broad reach, and contact with the public,” Matějková explains. “It’s pleasant and inspirational to see how people like it. With free sculptures it always takes time,” she adds. The artist’s work can be seen in the Senate building, for which she created a “screen” made of basalt columns and glass. Smaller sculptures are on display in the Pyramida gallery. Sports fans know her glass crown – the Best Athlete of the Year award. 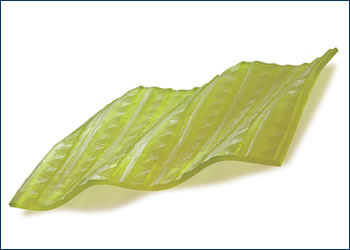 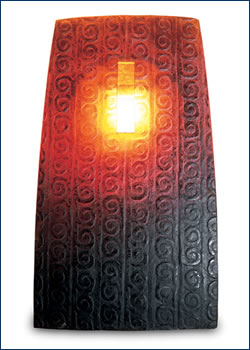