On his first visit to Prague, a month before the new year, the founder of low-cost airline easyJet sat down to talk with The Prague Tribune. The face of the “easy” brand spoke about sticking the easy name on everything from hotels to men’s toiletries.

What is the secret behind the success of the easy brand?
Well, easyJet will be 10 years old this year, but basically I started in the shipping business – first, with my family, then I created my own shipping company. I moved to aviation [in 1995]. Within three or four years of starting that, I suppose I got bored, so I started looking around at what else I could do. Then I embarked upon this brand concept, though I have to admit that I got the idea from Richard Branson and his Virgin brand. The asset is really the brand. We developed it sometime around 1998, and it became famous around 1998-99. So when easyJet went public in 2000, I decided to separate the brand from the airline. Now I license it to the airline, but I’m free to develop and expand it in other areas. Recently, the most unlikely brand extension – which even I wouldn’t have expected – has been men’s toiletries. Now we have a deal with [British chemist] Boots to develop a line of men’s products called easy4men.

How did the name easy come about?
I think I was in a bar one evening (laughs). Actually the working title was StelAir, but I thought it was too egotistical. So I started looking for something that would suit the position that I intended for the airline, which was value for money. Eventually I came up with the name easy. 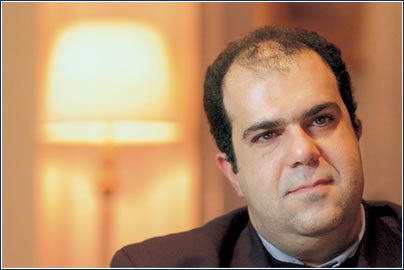 Had you always planned to extend the name as a brand?
In the first three years, the only concern was to survive. I suppose I started getting these ideas after I was satisfied with easyJet. Also, as the face of the brand, I had this unusual position to be able to feel when we had a brand. When people started stopping me on the street, then I knew it.

When you’re looking to expand into a new area of business, what criteria are you using?
First of all, I only invest in consumer business. I look for things that are price-elastic, which means if you reduce the price, people are likely to consume more. For example, the classic saying is not to invest in funeral homes because people only die once. Essentially the criteria revolves around brand values in four areas: it has to be value for money; then it has to be fun; it has to be innovative – we must do things differently – and it has to be for the little guy. We always like mass appeal.

Don’t you ever worry about overextending the easy brand name?
Well, yes (laughs). My answer is that there is no reward without risk.

So, for each new idea how many ideas are left on the drawing board?
I get a lot of ideas from others now; even our website has an area for this. What I’ve found is that some of the better ideas are coming from other companies – like the case with Boots. It’s a question of keeping your eyes open and talking to people in the hope that something interesting will come out of it. With our newest venture, easyMobile, it was just before Christmas in 2003 that I bought a copy of The Economist for a flight I was taking, and there was a special section comparing airlines and telecoms. At some point it said there were discount mobile companies like the Danish mobile service provider Telmore – which the magazine called the “easyJet of the mobile phone business.” So I thought ‘that’s interesting’, and I tore the page out and put it in my pocket. To make a long story short: a year later we now have a joint-venture with them. You know you have a brand when major companies are willing to pay for it.

Icelandair recently bought a stake in easyJet and there have been rumors of a takeover. Do you think the easy brand could survive without the airline?
It would be a lot more difficult. When Icelandair bought its stake, I said the airline is fundamental to my brand name.

How involved are you with the day-to-day work at the different easy companies?
It really depends. Because there’s so many, I can’t be involved too much in each one. But the younger the company, the more involved I am.

You’ve said before that you’re better at starting companies than at running them. How do you find the right people to run them? More importantly, how do they deal with you when you seem to get a new idea for a business every morning?
I can’t claim that I have the magic touch in selecting people. It’s mainly about luck. I think what you need are people with complimentary skills. You can’t have too many entrepreneurs. As for management dealing with me, easyJet doesn’t really worry about what I do outside the airline. I’ve structured it in such a way that I don’t disrupt the operations. I really believe the business of starting companies is the privilege of an entrepreneur, not an established company. What I’m doing as the owner is taking the risk.

How do you evaluate that risk?
The more unusual the business model, the bigger the risk. For example, the easyInternet cafes (easy-Group’s first venture) were an entirely new market – they didn’t exist at that time. That involved a lot of risk and I paid for it. What I’m looking for is a paradigm shift. I want to create something that doesn’t exist. It may work or it may not.
You’re starting this year [2005] with easyHotels. Do you believe there’s still room for easyGroup in the competitive hotel market? Are there any problems with real estate when you’re looking at city centers?
The market for low-cost, city-center accommodation is there. How big it is depends on execution. My thinking is the more expensive the real estate, the more likely it is for the consumer to accept a smaller space because they save more money. So my concept should work where real estate is very expensive.

Moving to more personal things: you were born into a wealthy shipping family and worked in the family business for a while. Why did you choose to get away from that?
I suppose I get bored easily. I am a workaholic; I can’t sit still. I was also fighting very hard in the early years to get rid of the “daddy’s boy syndrome.”

How did you go from shipping to your current position?
I think a moment that has changed my thinking about business was when I was working for my father and one of the company’s ships had a very bad accident [in 1991]. It was a tragic event and something that changes your thinking. So I decided that if I’m going to work and do business, I wanted to do something that makes me popular. This is the easy brand.

How exactly did that accident affect you?
It taught me a very simple thing about safety: if you think safety is expensive, try an accident. You’re better off investing beforehand so you don’t have to pay the cost of an accident.

Your wealth is valued at nearly GBP 800 million. What charity plans do you have?
That [figure] is an overstatement. My charity work is so far related to my father’s giving. But I’m getting to the state of thinking about my own legacy, so to speak. I’m very keen on scholarships. I think educating people can really change lives. It’s the old proverb: you give a man a fish, you feed him for a day; you teach him to fish, you feed him for a lifetime.

Where do you see yourself in 10 years?
If someone told me 10 years ago that I’d be selling men’s toiletries, I would’ve told them they’re nuts. I find it difficult to predict. I’d like to see most of the easy companies successful. You can’t possibly make them all successful. If everything you’ve done always succeeds, it means you’re not taking enough risks.