After years of motocross success, Ervin Krajčovič built his own team with a mix of international riders, who compete around the world. He’s seen the sport evolve, and talks about how his experience helps him lead the riders of today – and tomorrow. 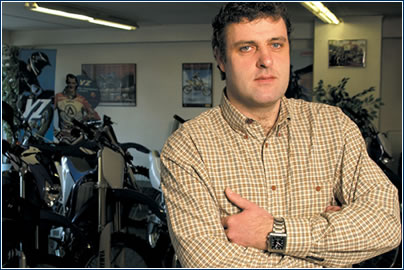 You manage one of the best motocross teams in the Czech Republic. How much does twenty years’ experience with racing help you as a manager?
I can put myself in the drivers’ shoes and figure out a situation before it causes problems for us. Of course someone who’s never raced can manage a motocross team, but I think he’d find himself serving as just an organizer. The scope of my activities is very broad. I can technically prepare motorcycles, I can help the drivers train, and I also resolve organizational and business matters. I think that 80% of the managers in this field are former professional drivers.

What aspects of motocross have changed the most since your successes in the sport?
Of course the technology has progressed in three leaps. Today there’s a different driving style, different motorcycle preparation, and a different race system. Motocross used to be a more individual matter, but today the management makes all the decisions. Licenses are now granted to teams, not to individual drivers, and it’s up to me to decide which drivers will race.

What are the prerequisites for an ideal motocross driver?
I look for drivers with professional attitudes. Character isn’t important; it doesn’t matter if a driver’s diffident or a fighter, but he must want to win. Motocross is a hard sport, it hurts. Additionally, it’s expensive these days to start out in motocross. A young driver who wants to race at the world championship level must bring 1 to 1.5 million crowns to the team. The team provides service, backing, mechanics, and an image, but the driver must find his own sponsor. The best drivers can even start earning money in two or three years.

How big is a motocross team, and how is it made up?
Each driver has his own mechanic, we call him the driver’s right hand or his brother. They must be a tight-knit team. It’s very important, and it’s bad when they squabble to the point that the mechanic must leave. The team cultivates its mechanics, since it’s hard to find a good one who’s willing to travel the world from January to October. I am on the team as a sports manager and there are also Yamaha representatives, so there’s a total of seven people for two drivers.

You manage an international team – does this help or hinder you?
Our base is in Italy, and besides Italians and Czechs, we also have an Australian driver. Due to the distance, communications are time-consuming, but I like it because it’s all very professional. I manage the drivers, who have won multiple world championships. They place in the top five in Grand Prix competitions, and they’re highly responsible people.

What is your management style?
When everything’s going fine I try to be an equal partner with the guys. Mechanics, drivers, manager – we’re all in the same boat, each of us mans an oar, and the boat must make headway. Everyone has his own responsibilities. Of course when something goes wrong I use my authority, because I’m responsible for sponsors’ financing.

You also coach the junior team. Why did you get into that?
My son wanted to race too, so I started training him. Other fathers soon asked me to train their kids, too. In two years I created a junior team and slowly shaped it like the adult drivers’ team. I wanted to raise a Czech racer and I succeeded – the current republic champion is from our program. He isn’t even 15, and he’ll be the youngest Czech Grand Prix driver.

What are the greatest risks in motocross?
The equipment is often the problem. In Italy it’s warm and dry, then we go to England, where it’s damp, so we have to adjust the way the motor’s tuned. The track surface and choice of tires is also quite important. Nevertheless, the greatest risk is driver injury. You can control the equipment to a certain degree, but motocross is a dangerous sport, and you have to always expect that something could happen. Only a few drivers get through a season without injuries. Last year two of my drivers broke arms in one race, and it was six weeks before the team was stabilized.

Does fear play a role in races?
Fear plays no role during races, because the driver is in a euphoric state and must make decisions in tenths, hundredths of seconds. It’s worst about an hour before the start. If you’re not psychologically stable your throat tightens, you sweat, and your concentration and vision deteriorate. So every driver has his own pre-start ritual that helps him suppress the tension. Some listen to their Walkman, some jog, some just want to be alone.

How important is the start of the race?
The start accounts for about 70% of success, and if even the best driver starts in 20th place, the leaders can leave him behind immediately.

What do you think is the only thing that can’t be taught?
Ambition. But often there’s also a psychological problem. Some drivers are more unstable at the starts – in training everything’s fine, but then the race starts and there’s stress, many people in the crowd, and nervousness. Although a driver’s well prepared for the race, his psychology can keep his performance from being its best.

What racing experiences can drivers use in their personal lives?
I think that the sport makes people more resistant to failure; they don’t give up easily in bad situations and can find other solutions. I try to pass this on to young people. I’m teaching them patience.