Not so long ago, there was little reason to come to Nové Butovice, save a wander through the greenery of the Prokopské Valley. Development has been rapid in this corner earmarked as one of several city centers under the “Strategic Plan for Prague”, 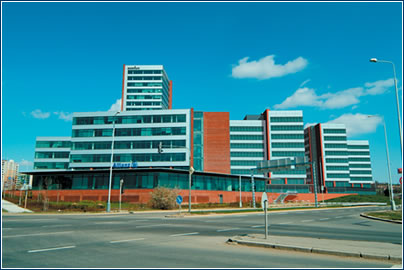 THE NOVÉ BUTOVICE housing estate, built in the 1980s, was the last residential project in the Southwestern City area now known as Prague 13. It was not until the late ’90s that the new generation of property developers began buying plots clustered around the metro station, 9 km from the city centre. With projects pushing skywards, over 18,000 commuters now disembark daily from the metro six stops from the end of the yellow line, according to ING Real Estate, owner of the recently unveiled Galerie Butovice retail park. More than 12,000 people work in offices in the vicinity.
Both Renata Kodadová of ING and David Lawn, development director with Central Resource, the development and asset management arm of Doughty Hansen, maintain that catchment for their tenants increases to over 1 million when taking a journey of up to 30 minutes into account. They agree with Richard Curran of CB Richard Ellis that the 10 minutes extra traveling time to a spot like Zličín makes all the difference, and as Curran also notes, there’s very few residents there.
For office projects the short hop to the airport is another important feature. However, the root of the rise of Nové Butovice is found in the proximity of the D5 highway towards Germany. A few hundred meters from the metro station, Pekařská and Šafránkova streets has hosted German companies such as SAP, Philips and BASF for some time, helping to signal the area’s potential to developers.

The first to make a move were Central Resource, who unveiled Building A of Office Park Nové Butovice in 2000; Building D came online two years later. Having attracted tenants such as Allianz and Accenture, a further 9,000 m2 is now open, with more to come. Some might consider committing such volume on spec to a spot like Nové Butovice a fairly bold move. Lawn says that the company’s “expertise allows [them] to recognize areas with long-term potential”, whilst Doughty Hansen’s financial muscle allows for developmental risk.
Now from his office, Lawn can see a Galerie Butovice’s 46,000 m2 retail and office park across the main road, and beyond, the Avenir Business Park from Immorent. In the opposite direction is a new German International School at the center of residential development by Skanska. Office Park’s success has helped the confidence of others, yet it’s not all one way traffic. Galerie Butovice will aid the marketing of Building B at Office Park, offering tenants facilities for their employees.
There are differing opinions on the ease of working with the Prague 13 municipality from developers. One suggests that because district authorities in the Czech capital don’t see direct financial benefits, they are not as interested as they could be. However, Tomáš Cirus, head of Prague 13 building department suggests a great volume of development is still needed. “In the first stage of the south-western city construction, residential houses with the most urgent public utilities were built; later on, these public utilities turned out to be insufficient” he explains.
Despite so much new office space, he notes “a lack of buildings to provide more job opportunities for local residents” as well as recreational and retail facilities. Further development should help here, especially once the D5 highway comes barging through the center of Nové Butovice on its way to link up with other trunk routes at Zlíchov.