This extremely vital, world-renowned conductor is a natural and charismatic leader who places great demands on his team, but mainly on himself.

Twenty years ago you were named head conductor of the Czech Radio Symphony Orchestra. It became a well-known European orchestra under your leadership. How did you achieve such recognition?
I convinced the management that the orchestra had to appear in public. Also, work productivity was much lower prior to my arrival. For instance, only three minutes of recordable music had to be played each day, while today ten to fifteen minutes is normal. The orchestra had many fine performers, but their potential wasn’t utilized. I wanted to change that. I asked the musicians to arrive on time and be totally prepared. I managed to improve the orchestra’s quality and bring in young blood.

Do you have a formula for getting the most out of a musician?
Above all you have to be very demanding of yourself. If I want to start at nine, I get there at eight. You mustn’t make any mistakes, and you have to be able to convince people that your way is the only possible way. You need authority, but that takes time to build. Charisma is important, too, for getting others to follow you. Every leader, regardless of the field, should know a way to prevail upon others. In my childhood I organized various events, sports matches, and games. I’ve always been a leader, automatically.

So you’re satisfied with being a leader?
It’s satisfying for every ambitious person. But being a good leader is a gift from God or nature. When you’re faced with your first difficult decision there’s no one to advise you, you have to decide yourself, even if you turn out to be wrong. A leader can’t be all things to all people, so he also has to have the courage to be unpopular, get into conflicts or, in the best case, to prevent conflicts. It’s a matter of experience. My principle is to keep my feet on the ground, to live in reality. You can set whatever goals you want, but if you don’t have the right people and conditions you won’t achieve anything. 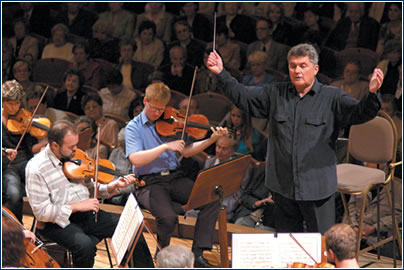 Can one learn to be a good boss?
I don’t think it can be learned. I myself went through tempestuous development. At first I was very emotional, I easily flew off the handle, and sometimes I acted badly. Now I know that nothing is achieved through such behavior. Also, I was overly trusting and naive. I came to Prague from Moravia with my heart on my sleeve. My professional error was becoming too personal with some of the musicians. It’s terribly difficult to find the limit on interactions with others.

What other qualities should an ideal boss have?
Mainly, he or she should be a professional with experience, as theory and practice are two different things. Like any other boss, a conductor should respect his people, since he needs them. And they should respect him. A boss has to sense when to compromise, to admit when another person’s right.

How do you resolve professional misbehavior?
I don’t have any absolute authority. In our art discipline is voluntary, we aren’t in the army. I have to convince people. If the team is good the musicians will enforce order among themselves, because when someone acts up, the rest push him out.

Is there rivalry in the orchestra? Is the second violin envious of the first violin, etc?
It could happen elsewhere, but the people here are supportive of each other. For instance, when a flautist plays a nice solo, the oboist pats him on the back. That’s how it should be, because when the orchestra pulls together the results are best. This is reflected in the good atmosphere within the team, which is why I like working here.

You are currently the permanent visiting conductor of the Osaka Symphony Orchestra in Japan, but you’ve conducted all over the world. What’s the difference between conducting here and elsewhere?
The greatest difference probably lies between us and the Japanese. They’re so disciplined that the figurative pin dropping makes a racket. They’re perfectly prepared, and they exert lots of effort. But they’re not the natural musicians and masters of melody that the Czechs are. The Germans used to be known for their proverbial drilling, but that’s no longer true, as young people there are relaxed. And the Israelis don’t care much about discipline, but when they start playing they put everything into it, with great results.

Which common traits do the orchestra’s musicians have?
Although they’re all professionals who have studied music, they aren’t all the same, so they must be approached individually. There are some who aspire to careers as soloists but things didn’t work out for them, so they play in the orchestra. Others like to be a part of the orchestra, where they feel safe, because they aren’t psychologically strong enough to perform solos. In fact, they’re mostly defenseless, sensitive, emotional people, and of course they’re vain. Our orchestra, with 110 members is a sort of microcosm where you can find everything.

When did you experience the most stress?
I’m under stress at every concert (laughs). It’s a blend of stage fright and tension, and the older you are the worse it is, as people expect a lot from you. When you’re 25, people say what a clever guy, look at how well he’s doing. If he fails they write it off to his youth. When an older person is a leader the demands are greater.

Do you have a formula for managing stress?
First, you have to be perfectly prepared and you mustn’t feel any pain, which is nearly never the case at my age (laughs). I have a crutch that helps me relax. I really love sport aviation, and when I’m in the cockpit I tell myself not to worry, it’s not as bad as being in the Rudolfinum before a concert. And before a concert I tell myself it’s not as bad as flying solo.