Junior Achievement (JA) is the oldest and most widespread non-profit educational organization in the world. We spoke with the executive director of the Czech branch about the group’s goal of developing a knowledge of business and trade in youth. 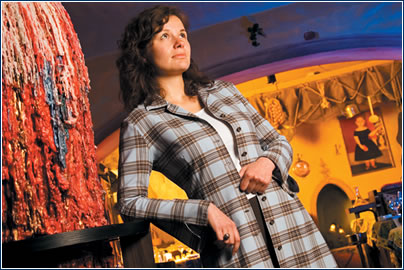 You are engaged in educating children in economics, and one of your projects, called “The ABCs of Business” is designed for twelve-year-olds. Are they really interested in terms like management or marketing?
You’d be surprised! Children grow up in families, perceive what’s going on in society, and commonly encounter terms and problems that adults resolve. These young children absorb information as eagerly as a sponge absorbs water, and Junior Achievement (JA) makes use of their initial enthusiasm. It’s a bit different with teenagers, who already have clear wants. They get allowances from their parents, but they often have to budget it, or learn how to get more of it. We teach them how to make money so they can meet their desires themselves.

JA’s most popular project, globally and locally, is called “Student Company”. The students set up real firms that make real money. Can you explain how it works?
These companies work with real projects, products, services, and money. They get their basic capital by selling bills of exchange worth CZK 100, which they receive from us. The students sell them to people whom they can convince about their business plans. Imagine a typical school class with friendly and rivalrous relationships – there are three natural leaders, and they all want to be the president of the company. This is the first learning point: they must prepare strategies that will convince the others to vote for them. Then they have to delegate positions in the company, attract creditors, and agree on what is to be produced or sold. But the goal of the student companies isn’t profit, it’s learning how to do business.

How do children react to bankruptcy?
It’s perhaps a greater lesson than success. The most important lesson is that without pain there’s no gain. Then both success and failure can be seen as positive, because it teaches them to harden themselves to the external world. Even the best business plan doesn’t guarantee success. This is something they’ll encounter all the time as adults, and the better they can argue, seek out compromises, and adapt themselves to changing conditions the better.

What percentage of those 180,000 students who have taken JA courses in the Czech Republic go into business as adults?
Unfortunately, we don’t have any figures for the Czech Republic, but research conducted in Sweden and Norway shows that 20.5% of JA graduates actually establish firms, compared to only 4.5% of students who didn’t take JA courses. We get feedback only from those who stay in touch.

Junior Achievement was brought to the Czech Republic by world-renowned entrepreneur of Czech origin Tomáš Baťa, who is now the honorary chairman of its administrative board. How closely does he track today’s activities?
He monitors us constantly! Whenever he comes it’s like a hurricane raging through the office, and he asks everyone what they are working on right then. He demonstrates the appropriate enthusiasm and always tells us what can be improved. He loves meeting with students, and he emphasizes that it’s very important to learn languages, to be open, and to learn something new every day. He has a great sense of humor. Once he was asked how he maintains his good spirits, and he said that besides success in business it’s also important to marry well (laughs).

Does his name open school doors and the wallets of sponsors on whom you are financially dependent?
Yes, but we’re already seeing a difference between the young generation and the older one. For the thirteen-year-olds and older those doors are still open, but the very young no longer see him as such a legend. He’s a part of history for them.

One of your projects is called Global Business Ethics. But in this country children can see that it sometimes pays to act unethically – to malign your competitors, not to play fair or honor debts. Do you think the upcoming generation of entrepreneurs will accept ethics as a natural part of doing business?
We haven’t had any problems yet with any student intentionally falsifying or distorting results. That could be a sign of improvements ahead. At JA we work on ethical problems in groups, in which they think over how to solve ethical problems that have actually arisen in the past. And we also discuss the issues with other JA branches around the world. True, globalization is nascent in this country, but it will develop, and people will have to travel around the world and work in teams with, say, an Indian, an American, and a Czech. We can already see this in multinational corporations. Our students learn to undertake joint projects as games and reach agreements, but also to explore cultural differences and varying opinions on ethical matters.

Today’s generation of thirty and up went through an authoritarian education model, when allegiance was valued and discussion wasn’t permitted. JA works on the exact opposite basis. Tell us about your experiences with today’s students along these lines.
Unfortunately, I must say that the Austro-Hungarian authoritarian education model still persists in most schools. The greatest stumbling block is passivity. We’re trying to get over this barrier, we’re trying to change school directors’ and teachers’ attitudes, so that they are accommodating and open to the world, and so that conservative teachers with their auras of omniscience become their students’ partners and become able to admit that they don’t know everything and are still learning. But this assumes that they change their habits of many years, and we can see that not everyone is able to change so much.

JA branches in different countries work closely together. Could you compare how it works in this country and around the world?
In terms of mentality, interest, and approach to life, we’re all quite similar, but in the Czech Republic we have to deal with one problem – knowledge of languages. Even in 2005 our students are unable to participate in any international event that requires excellent knowledge of English. In comparisons with the Nordic countries they come out poorly. They should know that knowledge of languages is really the basis for everything.

What advice would you give students for successful careers?
Don’t think you’re the smartest person in the world – learn from others.

Where would you like to be in five years?
I’m looking forward to it. I enjoy always learning things, and I’m enjoying getting older. I’ll definitely be less naive, and hopefully I’ll be wiser.

How would you describe yourself in a few words?
Hard-working, thoughtful, and sometimes easy-going.