This Czech scientist has been leading a cancer research team in Copenhagen for thirteen years. We spoke to him about his team’s recently published findings, which will have resounding effects on worldwide cancer research for years to come. 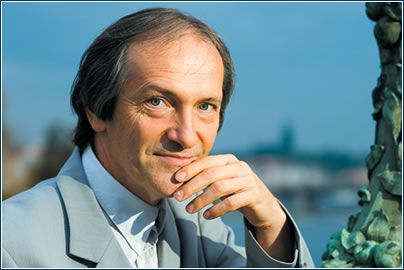 Your discovery this spring explains why cancer cells divide. What is so exceptional about this discovery?
The idea that there must exist a system that protects cells against tumors is not originally ours. The frequency of mutations and changes in our DNA and the frequency of tumors clearly show that there must be some mechanism that keeps each damaged cell from degenerating into a tumor. The question that many laboratories have been seeking the answer to for over 20 years is, ‘How does a cell learn that it is about to degenerate, and how does it deal with it?’ Our project resolved these two aspects, and that’s why it drew so much international attention. It’s the key to better diagnostics and treatment.

Can you explain, in somewhat layman’s terms, why cancerous cells divide?
Genetic information must be doubled each time the cells divide, in order for the genes to remain the same. The cell that is about to become tumorous can’t make the change without errors. We discovered that while in normal tissue you don’t see any activation, in the immediately adjacent tissue, where there is an early pre-tumorous change, the entire supervisory network that watches after the quality of genes is activated. The system puts an end to such cells and delays its division until the genes are corrected. But if it’s in long-term inactivity, other changes could occur, and there will almost certainly be a change in the supervisory system too. Then the cell can escape and despite its damaged DNA it multiplies, giving birth to a tumor.

This discovery, affects or will eventually influence, the lives of many people all around the world. Do you know how important your work is?
That’s a tough question. We’re trying to keep our feet on the ground and continue with our work. We know we’re among the most cited, so it must be important. But we won’t let it affect us…for example, receiving the Nobel Prize would be a catastrophe.

Why would it be a catastrophe?
Because then you couldn’t get into the lab anymore. That commits you to taking part in charitable events or joining commissions. I think only a very few people have been able to survive it in the sense that they could carry on with their work and do something meaningful.

You studied medicine in Olomouc. Why did you go into science instead of working at a hospital?
I liked biology when I was just a high school student, but I majored in basketball. When I had to decide what to do next, I chose medicine. I was reading the autobiographies of several scientists, and I got caught up. I started helping out in the department of medical biology under Professor Hejtmánek, who is a fantastic person for getting you excited about research. It was clear from the start that I’d never go into clinical medicine.

After you graduated, you left in 1983 for an internship in London at a very prestigious institute of biology. How did that influence you?
That was a major milestone for me. The Imperial Cancer Research Fund is the finest institute for cellular and molecular biology, not only in England, but in all of Europe. I made some contacts there that are priceless. Several of my colleagues and friends from there have received Nobel Prizes since. You become a part of the global fabric, you learn about new methods, and you understand the competitiveness. You also learn the language – English is absolutely necessary in science.

Now you’ve lived and worked in Copenhagen for 13 years. What brought you there, instead of somewhere else?
I arrived in Copenhagen at the end of 1992, and it was just a question of timing. It was possible to emigrate before that, but we didn’t want to because we didn’t know what would happen to our relatives here. But when the borders opened up, I sought work in Copenhagen. My colleague from East Berlin, with whom I’d worked in London, urged me to enter a tender for this position, together with him as a team of two. We won out even over the locals, mainly because of what we’d already published and the program we presented.

You later received many offers from prestigious facilities in England and the US, but you turned them all down. Why?
The offers were attractive, but we turned them down mainly because moving a laboratory is a nightmare for a scientist. The lion’s share of the people we’d taught wouldn’t have gone with us, we would have had to start nearly from scratch, and would have lost at least a year or two. The second reason was that we had invested nearly thirteen years in building our facility. And much of that expertise and equipment doesn’t exist anywhere else. The third reason is that today it’s easy to work together with anyone in the world, we can communicate via e-mail, and Fed-Ex delivers everything overnight, and we meet at conferences several times a year.

Money poses the greatest problems for Czech science. The government is often criticized for not giving the field enough money. Are there other ways to get financing?
I don’t know exactly how much money the Czech Republic sets aside, but Denmark doesn’t do much better and is also criticized. But the state is far from the only source. So far we’ve been getting, at most, 5% to 10% of our financing from the state that we need for wages and equipment. We get most of our funds from the private Danish Society for Cancer Research. We get another quarter or third of our funding from Brussels.

In this country there is a lot of talk about the low wages of scientists early in their careers. Do you think that having access to better equipment could make up for scientists’ low wages?
Yes. I don’t want to say that wages aren’t important, but when you compare them, it looks like we have a lot more in Denmark. But then you need to take prices into account…for example, we pay 50% to 60% in taxes. It seems to me that today when you compare wages to purchasing power it’s almost the same. In Denmark the prices of many types of goods and public transportation are three to five times higher. And Denmark is also a very egalitarian country, they stand on being very socially oriented, and the differences in wages are very small. We don’t make much more than our students do.

You do research with your wife, who is as devoted a scientist as you. Does working with your wife bear better results than if you worked with other scientists? How does it affect your private life?
We work well together, mainly because she’s a pathologist. Back in the Czech Republic, she worked at first-rate pathology departments, mainly dealing with tumors. She was a diagnostician, and her expertise and mine complement each other well. Most researchers in our field are biologists, chemists, and, rarely, physicians. None of them dares look at tissue sections and diagnose what they see, but she had 12 years of practice, so she can apply any idea directly to human material and say what it means. Family life also has an influence, of course. Sometimes our children have paid when we came home late. A partial solution was buying a powerful microscope instead of a car, so my wife can do a lot of her work at home.

Do you also talk about your research with your children?
Now we do, because our son is in his third year of medical studies in Copenhagen, and our daughter is in her last year of high school and is interested in biology. Her main inheritance from her father is basketball. She’s the youngest member of the Danish national team and is the only one in our family to have to change citizenship, as otherwise she couldn’t play.

Where do you see yourself in 10 years?
Ten years is a long time, but if you think about where you were 10 years ago, it’s not such a big jump. I think we’ll still be dealing with how tumors originate, but more in the direction of applied medicine. I think we’ll be closer to treatment and diagnosis, and we’ll have a better understanding of it.

How would you like people to remember you?
Maybe as a basketball player. Hopefully my basketball friends will remember me as a rather good player and a good friend, and my students as someone who helped them or who was able to point out the way to them.