One of the country’s richest people, oil tycoon Karel Komárek, Jr., granted The Prague Tribune an exclusive interview. He spoke about his business, why he doesn’t sponsor politicians, and what he’s planning for the Fischer travel agency. 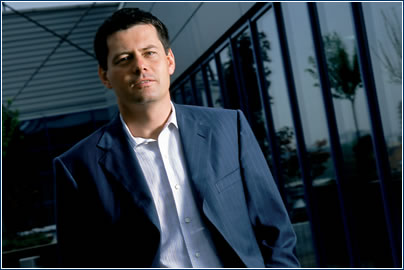 Your family has been in business for 12 years. Last year you made a record gross profit of nearly CZK 3.5 billion. Do you still remember starting out in business?
Like many others, we started out buying and selling. We traded in industrial fittings. We offered our clients comprehensive services, that is we not only supplied the goods, we also transported and serviced them. At that time such services offered large margins. After two years the firm reached between CZK 100 and 200 in revenues and about a million in profit. Later we did business with gas regulation units, and finally began manufacturing them ourselves. From there we had access to the gas and petroleum industries.

What were your key decisions in that period?
It was a combination of several circumstances. We started our business at the right time, in good fields, and we chose good colleagues and partners.

What was the hardest thing for you at first?
That we had no experience. We had to quickly learn “on the fly” what the business’ basic attributes were, and about shares, taxes, laws, etc.

Yours is a family firm. Sometimes a business divides a family forever, while it brings others together. Which was it in your case?
For us the advantages predominate, but naturally sometimes we have big disagreements, too. The great advantage is that you don’t have to watch your back, because there are people behind you who aren’t interested in playing nasty tricks on you but are, conversely, ready to support you. Disadvantages? When a conflict arises it involves the people closest to you. We’ve been through many such conflicts, and we’ll certainly face more in the future. But I think that even exchanges of opinions contribute to finding the right direction for the company.

You’re in business with your father, sister, and uncle. How have you divided up the “spheres of influence?”
My dad provides leadership processes and wisdom about life, and I dream up new projects. My sister’s field is taxes, accounting, and auditing, and uncle František takes care of Moravské naftové doly (Moravian Oil Wells).

How big an employer is your family?
We have about ten thousand employees.

What would you say are the greatest obstacles to doing business in the Czech Republic?
When I compare our system with what I know from other countries, our regulations, edicts, standards, and norms are too complicated. The tax system should definitely be changed. I’m not in favor of direct taxes, I don’t think there should be any, while everything related to consumption should be taxed, either through value-added tax or consumption tax.

You founded a holding company that associates your engineering firms, in the Netherlands, a friendlier tax environment. Did you do that because of the high taxes here?
Lower taxes was only one of the reasons. Another is the attitude towards other investment opportunities, the proximity of capital markets, and the possibility of financing large potential acquisitions in the future.

Do you think state representatives should help entrepreneurs more? For example, President Klaus was lobbying for the PPF financial group when he visited China. Do you participate in government representatives’ foreign travels?
No. We try to take care of our own business matters. Of course, if we were in Germany, where lobbying for the country’ firms is a priority for the trade and foreign affairs ministers, that would be great. But the Czech Republic is so tiny that it takes a leading personality like President Klaus to have respect abroad. In general I think politicians should do only two things. First, set understandable, transparent, and simple rules of the game, and second, reasonably distribute the money they collect in taxes. If they’d do just that, it would be enough, and they’d be busy.

Do you think our politicians aren’t doing that?
Far from it. A state should operate on the principle of business, conceptually and long-term, not randomly, as is the case. Also, some politicians behave arrogantly. Maybe they aren’t aware that they serve us and are paid from out taxes.

We often observe politicians’ attempts at interfering with the business environment, for instance in public tenders. Has it ever been suggested that your support for someone would result in you getting a juicy order?
Of course we get invited to sponsor various events, but we don’t do it on principle, and people generally know that about us. They also know that we haven’t succeeded in a single privatization project, although we applied for three. We haven’t received a single order from the government! We probably weren’t successful enough. (laughs)

So you don’t sponsor politicians. Do you sponsor something else?
Our group sponsors many projects, from health care, education, and sports to culture. In all the regions where our company is present, we work together with the local authorities. But people shouldn’t talk about such things, they should just do them.

Let’s return to business. When you decide on a project, which qualities must it have?
It has to have great potential for the future, as we’re interested in long-term projects. They’re more creative, and one usually makes more money on them.

Did you similarly analyze the purchase of shares in Václav Fischer’s companies? Now, in hindsight, do you think that deal was a good or a bad decision?
We certainly didn’t have such detailed analyses at first, because the deal was built to a great extent on trust in one person, who simply let us down catastrophically. I’d characterize it as one of those projects where expectations weren’t met at all. But as far as the business goes, I believe we’ll be able to stabilize the project and develop it over the long term.

After meeting with you Václav Fischer said there was a clash of two worlds. Why did he think that?
Probably in the way his business ended. My world sees business as an activity that creates a service. But the service must be provided in a way that ensures a positive economic result. It’s not a charitable or random activity. Therein lay the clash between our two worlds. We do business in a way that ensures these criteria are met, because if they weren’t we’d wind up in bankruptcy and loss of face, which was borne out in his case.

But the public still sees Mr. Fischer as the injured side and you as the shark that swallowed him. Why?
The fact is that Václav Fischer is an outstanding fabulist who can distort facts in an unbelievable way. This also accounted for his popularity. But I think you have to believe results, not talk, and in this case his loss is clear.

So what is the current condition of CK Fischer? You essentially took over the whole company, since Václav Fischer holds a stake of only 0.07%. What are your plans for the future?
First of all, we didn’t take it over. We saved it from bankruptcy due to its huge debts that Mr. Fischer created and then ran away from like a coward. This year we’re gradually increasing our revenues and our clientele. Our goal for the future is that it will be a company that’s attractive not only because of what it offers, but because of its stable financial backing.

You’re wealthy enough not to work any more. What keeps you going?
If I didn’t work I’d probably go crazy at home. I need a mission in life, and I still enjoy doing business.

What would you like to be doing in ten years?
Thinking up new projects. And I’d like to be healthy.

How would you describe yourself in a few words?
I’m full of life.